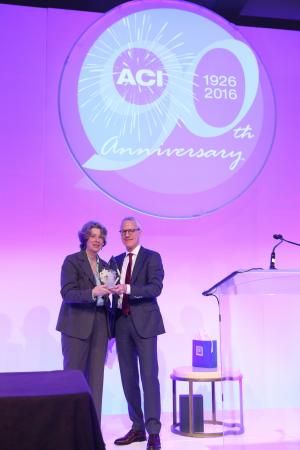 Washington, DC, February 10, 2016 – Suzanne Thompson, who has spent three decades as an innovative research and development executive in the cleaning products industry and was a leader within the American Cleaning Institute (ACI), is the recipient of the 2016 ACI Elva Walker Spillane Distinguished Service Award.

Suzanne also had roles leading Cleaning and Specialty Division R&D teams for Clorox. She has had experience in process development, product development and packaging development for divisions such as Kingsford Charcoal, Laundry, Home Care, Auto, Foods, Litter and Professional products.

In 2015, Suzanne joined Sealed Air as Vice President R&D for Diversey Care. She also leads the Outstanding Corporate Innovator Award Committee for the Product Development Management Association (PDMA) and is on the PDMA’s board of directors.

"During her many years at Clorox, Suzanne Thompson played an important leadership role within ACI," said Ernie Rosenberg, ACI President and CEO. "She served as Chair and Vice Chair of our Strategic Advisory Committee over a four-year span, helping to shape the development and execution of strategies that strengthened ACI’s role as the trade association for the cleaning product supply chain. She also assisted our efforts to rebrand the association in 2010.

"ACI also benefitted from Suzanne’s leadership, advice and counsel in the development of our performance surveys to help ensure we continually deliver value for the member companies of ACI. We greatly appreciate the countless hours Suzanne devoted to our association and the industry at-large."

ACI’s Distinguished Service Award is named in honor of the late Elva Walker Spillane, the former National Purity LLC chief executive who served on the association’s Board for 20 years.

The award honors an individual for extensive or exceptional service to ACI, who promoted the growth and interests of the Institute and the industries it represents; and who exercised outstanding leadership within ACI.
Ms. Thompson received the award during the 2016 ACI Convention.

The American Cleaning Institute® (ACI) is the Home of the U.S. Cleaning Products Industry® and represents the $30 billion U.S. cleaning products market. ACI members include the formulators of soaps, detergents, and general cleaning products used in household, commercial, industrial and institutional settings; companies that supply ingredients and finished packaging for these products; and oleochemical producers. ACI (www.cleaninginstitute.org) and its members are dedicated to improving health and the quality of life through sustainable cleaning products and practices.